I’ve talked about how B had acid reflux and MSPI, and how it’s often helpful to try a dairy (and soy) free diet to alleviate some of the symptoms for babies who have this.  I tried a dairy/soy free diet for B, and unfortunately it did not help ease the pain he was having from reflux.  Some moms go on a total elimination diet to try to pinpoint what exactly in their diet is causing baby’s pain/issues.  Because B was in so much pain, I just wasn’t willing to use him as a science experiment and, through trial and error, figure out what exactly was causing his reflux.  So we opted for formula- there are two types of formula that are made to help babies with MSPI- hypoallergenic formulas (like Nutramigen or Alimentum) or amino acid formulas (like Neocate, Elecare, Nutramigen AA).

A hypoallergenic formula has the milk and soy proteins broken down so that they are easier for baby to digest (and their body doesn’t react to them).  Amino acid formulas have all the proteins broken down into amino acids, so it is as gentle as it can possibly be for baby’s tummy.  A lot of people have great luck with these formulas.  We had the most success with Neocate, and B is still drinking that today. 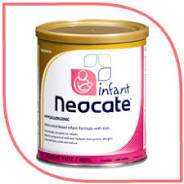 The downside to these formulas is their cost.  Nutramigen or Alimentum costs up to $30 for a can (which would last us 2-3 days).  Neocate or Elecare costs $50-90 a can, depending on where you buy it (and again a can lasts 2-3 days).  That means you can potentially spend almost $1000 a month on formula.  We all know babies are expensive, but the added cost of these formulas is not always something people expect.

When we realized that B was going to do the best on Neocate, I did everything in my power to figure out how to avoid paying $1000 a month for formula.  Neocate is a prescription only formula, so the first thing I did was I went to our pharmacy to fill the prescription.  They filed the information with my insurance…who flat out denied me.  Ugh.

However, I was a mom on a mission.  After a lot of time on the internet and the phone, I figured out how to get our formula covered by insurance.  Unfortunately, because not everyone has the same insurance, what worked for me MAY NOT work for you- but I say, it’s worth a shot.  The worst thing they’re going to say is no.  (I’m adding in the disclaimer that I am in NO WAY compensated by this company- they have absolutely no idea who I am)

Here is what I suggest to hopefully get your formula covered by insurance:

I really hope that this tip helps some moms out!!

I’ve mentioned before that B had acid reflux as an itty bitty baby (and what gear worked well for us to keep him as pain free as possible).  I also mentioned that he had/has MSPI- which is a milk/soy protein intolerance.  In his body, the milk/soy proteins aren’t able to be broken down, and they leak through the intestine into the blood stream, which causes a reaction.  For B his reaction was acid reflux, as well as bloody diapers (caused by actual damage to his intestine).

Did you know this is more common than it sounds??

Most new babies have some sort of reflux (I feel like they need to tell you this in all those baby classes you take as a new, soon to be parent).  The flap that keeps their stomach contents in is very weak and immature, so when you lay baby down (or lift their legs to change them), some stomach contents come out.  Gross, yes.  And some babies will spit up every chance they get (or so it seems) and it doesn’t phase them (aka a happy spitter).  It’s just a laundry problem for mommy and daddy and anyone else within spitting distance.

This goes away as baby gets older and more mobile- sitting up, crawling.

When it’s a problem is when it’s accompanied by pain.  Which usually means a screaming, crying baby.  I don’t know about y’all, but whenever B screamed at that age, my blood pressure went up about 20 points and I couldn’t even think straight- all I wanted was for it to stop.  Tell tale signs of reflux are:

Not all babies who have reflux will spit up, however.  The stomach acid comes up just enough to burn their esophagus, but it doesn’t actually come out of their mouth.  I’m pretty sure this is what most pediatricians deem to be colic- baby cries for no reason and they can’t really explain why, so with a wave of their hand they say “oh, it’s colic.  they’ll grow out of it.”

This is incredibly frustrating- it’s so hard to watch your baby suffer.  And time literally stops moving when you have a baby with reflux- seconds feel like hours.

One thing I’ve come to realize is that, in a lot of babies, reflux (or other problems like bloody diapers, eczema, excessive gas) is caused by dairy and/or soy proteins- whether they are coming from breast milk or formula.  Not all the time, but it is more common than you would think.  Again, one of those things you wish they told you about in the new parent classes!

My best advice for new parents– if you suspect that your baby has reflux or if they are having major skin issues or anything else that is flagging your mommy radar, eliminate all traces of dairy from your diet, for a minimum of 2 weeks.  Soy proteins are similar to dairy proteins, so to be safe it is a good idea to eliminate all traces of soy as well- which proves to be very tricky.  Soy is in EVERYTHING and comes in many forms (so does dairy by the way).

It takes 2 weeks for dairy proteins to leave your system, so if you’re breastfeeding it can take a month to see some sort of relief for baby (2 weeks to leave your system, 2 weeks to leave baby’s system).  I know this feels like an eternity, but often this is enough to do the trick, without having to resort to medication or formula.  Look at it like a science experiment- change one variable at a time and evaluate the results, then change another variable (eliminate additional allergens from your diet such as wheat and/or egg; add medication; switch to formula).

I bring this topic up because B is eating solids- and I’m starting to challenge those foods that I’ve kept out of his diet.  Being MSPI isn’t a life sentence- babies usually outgrow this at some point.  So far we’ve trialed wheat (passed!), eggs (passed!) and soy (passed!).  Dairy is next up, and while I’m still scared (reflux rearing its ugly head again is always in the back of my mind) I’m hopeful.  We are going slowly and being optimistic!!

Some great resources that have helped me: